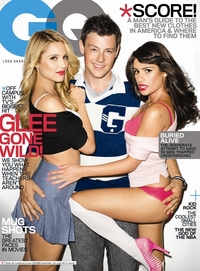 Many people have been talking about the recent photo shoot of two adult women who play high school girls on the TV show Glee. Some parent groups have called the photos child pornography. Now, I don’t really think  that’s true, since the women are just that, adults. However, I do agree with this article‘s premise. What the author says is this:

“There’s no question that these photos play on the dynamics among characters on the show. But if that’s the case, what do these particular photos say? They say, “Sure, these girls are sexy, but you know what would be really sexy? If they were dumber. If they were weaker. If they were more desperate.”

These photos promote the idea that what makes a woman sexy isn’t her mind or her strength. Instead, what makes a woman sexy is her willingness to be objectified. That’s what makes these photos frustrating. Why can’t women who can make decisions to portray even imperfect characters also stand up and tell a photographer “no way am I doing that”? It is time for every woman who has a shred of interpersonal strength and character to start saying “no” when people ask them to do things that don’t promote their strength, but instead portray them as weak. Every woman. That’s the way we change the world.

This entry was posted on October 26, 2010 by Jennifer Shewmaker in Acting, Recognizing and tagged media and gender, Operation Transformation, sexualization of females in the media, women and power.