When I saw The Hunger Games on its opening weekend, I was really struck by something:

Although the sexualization of girls and women is rampant in the media, Katniss Everdeen is not sexualized. Not at all.

Take a look at these images from the film:

The fact that Katniss is presented as heroic and strong without being made sexy is a big deal. Previous mainstream girl heroes have been defined by their sexiness. Consider the heroes of girl power, on shows like Buffy the Vampire Slayer and Charmed. With dedicated fans of both sexes, their producers seemed intent on making the girls’ strength less threatening by presenting them as sexy and sexually available. Here are a few images from such shows, featuring heroines who–unlike Katniss–are impeccably coiffed and revealingly dressed: 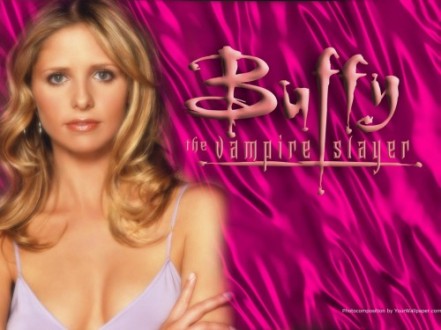 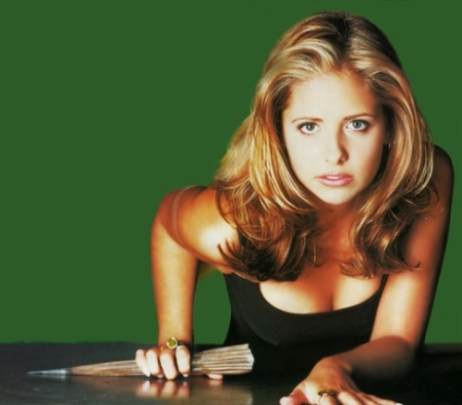 In my analysis, the concept of “girl power” seemed to hinge upon the idea that girls could be strong AND pretty at the same time. It broke the binary that suggested “strong female” is an oxymoron, almost normalizing the idea that being girly doesn’t equal being weak.

Girl power media targeting audiences of teens and adults presented strong-and-pretty as strong-and-sexy, with “sexy” narrowly defined (as illustrated by the above images). This link was so constant that it seemed you couldn’t have strength without sexiness, and that sexiness came to seem a natural part of being a strong female character on screen.

When Katniss appears in The Hunger Games in fancier, more feminine, more revealing attire, she looks uncomfortable. The performance of normative femininity is completely unnatural to her. It is an act, something she is forced to do–not a choice, and certainly not something she finds empowering:

This is probably why Hunger Games critics and fans have complained that Jennifer Lawrence is too “fat” for the role of Katniss. Because, seriously, by no stretch of the imagination is the woman shown above fat. She’s not as thin as Sarah Michelle Gellar or Alyssa Milano, but she’s nowhere close to being overweight.

No, they’re just not used to female lead characters who aren’t dished up to titillate a male gaze. If she’s not scantily clad in a super-sexy way, then she’s not attractive, which means she’s fat. Sigh.

In short, Katniss Everdeen is arguably the first post-girl power hero to grace the screen. Her presentation as a strong character who is not defined by her sex, and who is not sexualized, is a nice contrast to the message that “girls can be strong AND pretty/sexy,” in which pretty/sexy is ultimately obligatory.

Katniss Everdeen is a girl, and she is strong. But not in a girl power way.

And that’s a good thing.

If you liked this article, check out Rebecca’s blog at http://rebeccahains.wordpress.com/ and her Facebook page at https://www.facebook.com/RebeccaHainsPhD

This entry was posted on April 18, 2012 by Jennifer Shewmaker in For Teens and Tweens, Recognizing, What's out There That's Good and tagged Girl Heroes, Girl Power, Hunger Game, Katniss Everdeen, Media and children, Sexualization, women and power.