Fishnets and Fangs for the Win? The Dark Side of Monster High

I’ve written a lot about the Monster High brand and looked closely at the story lines and characters. While Mattel claims that Monster High is all about “celebrating your freaky flaws,” what I’ve seen is a lot of girl on girl social (sometimes even physical) aggression, sexualized dress, and bodies that line right up with thin ideal imagery. Overall, I have remained unimpressed with the Monster High brand as a toy that can affect children positively.

I was really disappointed that NPR recently shared this article, which basically seemed to be a marketing piece for Mattel. Where is the analysis of the brand’s weaknesses? There have been numerous experts and parents who have written about this brand’s troubles, and NPR didn’t even mention that.

Some readers have asked me why it matters if the toy promotes positive messages, can’t it just be fun to play with? The answer is yes! But here’s the deal, Mattel has promoted Monster High as a brand that builds positive self-esteem and helps kids learn to accept themselves and others. And I’m not buying that.  In my post A Monster Problem, I wrote about the fact that Monster High may be good for business, but may not be good for girls. Let’s look at three specific criticisms of Monster High.

I’ve  previously written about the themes of social aggression in Monster High in my posts, Is This How you Teach Acceptance,  Does Monster High Teach Kindness and another that provided an exercise in Deconstructing Monster High. My main problem with the Monster High brand is that Mattel says it promotes acceptance of others and oneself by embracing and celebrating the characters’ flaws and imperfections. And yet, again and again in their webisodes you see girl on girl bullying. Very rarely is there a realistic, prosocial approach that models for kids a positive and effective way to deal with problems with friends or bullies.

It’s been claimed that I’m just not paying attention to the character development, and the girls do learn and demonstrate prosocial skills later in the series of webisodes. Really? Let me show you two webisodes, one early webisode and one newer one.

In “Mad Science Fair,” the character Cleo takes advantage of her best friend by claiming that the winning project is her own. Frankie and Lagoona tell Ghoulia that she needs to stand up for herself. Good point, right? Kids need to learn to negotiate this kind of friendship issue. So how do the Monster High characters solve this problem? Is it in a way that promotes acceptance and teaches prosocial skills to young kids? Let’s watch….

Wow, great lesson! If your best friend takes advantage of you, get back at her through physical retaliation! But maybe there’s been character development that I’m not taking into account and the characters have learned to handle conflict better. Let’s check out a newer webisode and see if there’s evidence of that.

I don’t care if Monster High teaches prosocial skills and acceptance or not. If all Mattel wants to do is make money, fine with me, that’s their business. But when they continually promote the Monster High brand as teaching girls about acceptance and then consistently deliver this kind of negative content, I have to call them on it. There are a lot of great educational programs that are carefully developed to teach prosocial skills that give kids tools for dealing with bullying and friendship problems. Monster High isn’t one of them. I have noticed that the very recent webisodes have less social aggression, so maybe Mattel is responding to the complaints that they’ve had about that and trying to focus on more positive social interactions. If so, that’s a step in the right direction.

These characters frequently wear clothing that looks like it came out of a lingerie store rather than what you might see a high school girl wearing.When the children’s Halloween costume for Monster High looks this much like the Adult Woman Costume found in the “Sexy” section, it should be a red flag, people. 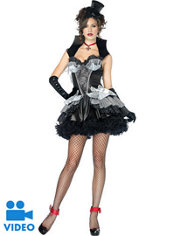 The clothing that these dolls wear is problematic. Six out of six of the female characters are wearing very high-heeled shoes and four out of six are wearing very short skirts. These are not outfits that would be allowed in most schools because they would violate the dress code of even the public schools that my children attend.

I asked some tween girls what they thought of the clothes that the Monster High characters wear. These girls said some interesting things. One said that the clothes were inappropriate because they were too tight and short. Another said, “Well, they’re childish, but not.” I asked her what she meant by that, and she said, “Well, one of the girls is wearing a tutu like skirt, which is little girly. But she also has on a shirt that shows her stomach and really high heels. So, is she supposed to look like a little girl or a grown up going to a club or what? It’s confusing.”

This input from the tween girls really spoke to one of my main concerns about these characters. They are highly sexualized. Say whatever you want about the message of fitting in and celebrating differences, but each one of the main characters is dressed in clothing that looks like something that the Pussycat Dolls would wear, rather than a high school student. Even the “fearleaders” wear high heels when they’re doing stunts! This movement of the sexy into our children’s entertainment is alarming. If you want to show girls who are different learning to embrace that, why not make some of them different sizes and shapes, and ditch the sexy outfits?

Just making the characters monsters might seem like a big step in the direction of accepting and celebrating something beyond the thin ideal and beauty standard, right? Well, except that MH girls continue to have the extremely small waists, long, thin legs, and curviness of other dolls. They just have different skin colors and some “monster” identifying characteristics, such as fangs on the werewolf and vampire characters and stitches on Frankie. The impression is still very much the celebration of the conventional thin ideal of beauty.

The Dark Side of Monster High

Come on, Mattel, just because you make your characters monsters with “fatal flaws” like their legs flying off at weird times or getting weak at the thought of blood, you are not promoting acceptance of diversity. The characters do have different colored skin/fur and different accents, which is great. But they all continue to meet the thin ideal standard. There are better ways to promote diversity and acceptance than through sexualized monsters.

If Mattel wants to promote self-acceptance, then the last thing they should be doing is promoting the thin ideal, sexualization, and a focus on appearance. Research has clearly linked consumption of sexualized and thin ideal focused media with concerns about weight, appearance, and with decreased self-esteem.

I love the idea of a brand that truly helps girls learn to accept themselves, flaws and all. Monster High is a promising premise, but as it stands now, the focus on appearance, sexiness, and issues over the target audience stand in the way of it being a brand that can truly claim to be socially responsible in the messages it sends to kids. Some of the most irate comments that I get about Monster High come from teenage and young adult fans who love these dolls. Hey, guess what, that’s because the dress and content are more appropriate for you than they are for the six-year olds who these are marketed to!

Does it make money for Mattel? It sure does, and that’s great for their bottom line. But don’t claim to be promoting self-acceptance in teens while selling sexiness to six-year olds. That may be good for business, but it doesn’t show that you care about girls.

Some helpful resources for those who want to look at peer reviewed articles on this topic:

American Psychological Association (2007). Report of the APA task force on the sexualization of girls.

7 comments on “Fishnets and Fangs for the Win? The Dark Side of Monster High”

This entry was posted on July 18, 2013 by Jennifer Shewmaker in Recognizing and tagged child development, identity, Mattel, Media and children, Monster High, sexualization of children.