Girls are More than That: Media and Gender Stereotypes

Brave Girls Want is an alliance of parents, experts, advocates and small business owners who believe that girls deserve to have healthy media options. We’re asking media makers and corporations to take a step back and consider the social impact that their products and campaigns have on their young target audience and on society at large.

Our alliance isn’t alone in wanting to see companies think about the impact that they’re having on the world around them. A recent global survey conducted by Neilsen (2013) shows that consumers care about the social impact that a product or company has, and they’re willing to pay more for products from socially responsible companies!

We’d love to see fewer stereotyped representations of girls, and more complex, well-rounded characters. I’ve heard people say, “But girls and boys are different, these companies are just giving girls what they want!” It’s important to know that culture and experience shape a child’s understanding of how they’re supposed to behave and what they’re interests should be much more than biology does.

In her book Pink Brain Blue Brain, Dr. Lise Eliot (2009) points out that there are very few real sex differences that are biological, and these differences are very small. When it comes to academic and social emotional abilities boys and girls have more similarities than differences.

So why are so many people convinced that girls need and want only pink, frilly, princessy toys, products and characters? Maybe because in the past fifteen years or so marketers and media makers have drawn very clear lines between boys and girls. Rigid gender portrayals in marketing and media send a clear message to kids that certain toys, interests, and behaviors are only “for” boy or girls. 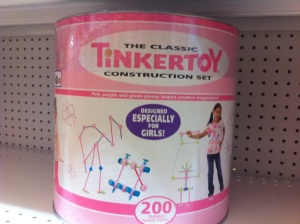 Media and marketing for children present an overwhelming array of gender stereotypes (Kahlenberg & Hein, 2010; Johnson & Young, 2002) that depict girls as cooperative, nurturing, and passive while boys are shown as competitive, active, and destructive. The words used in marketing to girls and boys are even different! Verbs that show agency and control and the simple use of the word “power” are used significantly more in ads directed at boys than those directed at girls (Johnson & Young, 2002).

So why does all this matter? It matters because research tells us that when kids are used to seeing boys and girls as separate and different, they tend to have more gender stereotypes themselves, have less positive feelings about opposite-sex peers, and not play with those peers as much (Hillard & Liben, 2010). But here’s the good news: Research also tells us that girls and boys both like media and marketing that promotes agency, independence, and community building (Bakir, Blodgett, & Rose, 2008).

Brave Girls Want is asking media makers and companies to show that they care about the way their products impact society, and especially the young and impressionable children in their target audience. Girls need to see that there are many different ways to be a girl. Girls can love pink, frills, and nurturing but they can also love blue, green, yellow and black, being active and competitive. Our girls are complex human beings with a wide range of interests, and they need to see media that depicts girls in more realistic ways. We’d love for you to join us in our campaign. Together, we can make a change!

Eliot, L. (2009) Pink Brain, Blue Brain How Small Differences Grow into Troublesome Gaps—and What We Can Do About It. Houghton Mifflin Harcourt, Boston.

3 comments on “Girls are More than That: Media and Gender Stereotypes”